I’m always at odds with myself at this time of year when Instagram is divided into two opposing sides of Team Fatness & Team Fitness, leaving my fat-positive-but-wanting-to-lose-weight-for-personal-health-reasons arse sitting awkwardly in the middle of a real life venn diagram.

It would be nice to think that fence sitters are removed far enough from both sides to avoid the bullets either camp is firing but, instead, I’m getting it from both barrels.

As if the festive period isn’t dramatic enough already without knowing that every year, when the clock strikes midnight on 31st December, your friends are going to start indirectly being a dick to & about you just for not being 100% on board with one of their beliefs!

This predicament haunts me all year round but it is especially rife at new year &, whether you’re fat, fit, or sitting on the fence, you know it’s true. Observe: 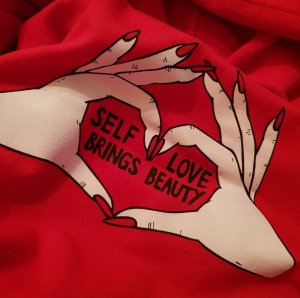 Team Fatness generally consists of the plus size, fat acceptance, & body positive communities whose argument is – quite rightly – that we don’t need to buy into a money making “new year, new me” fad devised by a weight loss company, because we love who we are every day of the year whatever weight we are.

Team Fatness are happy in our curves both physically (in terms of aesthetics) &, well, physically (in terms of physical health) & disagree also with the health side of weight loss, contesting that there are more effective ways to look after our health without focusing on our size; mental wellness, positive living, sleep routines.

The Team Fatness brand slogan (if indeed we were summed up in one easily Instagrammable caption) is “we are more than a “before” photo”.

Whereas Team Fitness – which is mostly made up of slimming club success stories, ex-fat people whose health/lifestyle/self confidence has benefit from weight loss, & people who have never had to live the fat like – love the fresh start of the new year to motivate us into self improvement with a bit of weight loss.

Team Fitness proclaims that losing weight &/or getting healthy can boost our new year into being our best year yet for reasons beyond just looking slimmer & being lighter but also by reaping other related benefits; improved mental wellness, positive living, sleep routines.

And the Team Fitness brand logo (again, if there was such a thing) is a raw “before” photo that encourages our “after” photo at the end of the year to be different, better, improved as a result of the changes we made.
As you can see, both camps are very similar.

Although both teams hate being criticized for what we stand for & claim to be a very open-minded due to being on the receiving end of ignorant negativity from those who have unnecessarily judged us, both are openly judgmental of the opposite just because they don’t buy into what we personally feel.

Doesn’t it all seem hypocritical & just a bit pointless when we see the two side by side in glorious technicolour?

Neither side are wrong.

Both make a valid argument that have the most positive intentions & we know Instagram ain’t Rupaul’s best friend race!

But, instead of making any kind of argument at all, can’t we all just practice what we preach in our “you do you/beYOUtiful/each to their own” attitude towards this whole Fat Vs Fit thing?

We can be fat and fit.

We can love ourselves and still strive for self improvement.

We can be a fucking masterpiece and a fucking work in fucking progress at the same fucking time! (And another F-bomb to empha-fucking-size that).

Practice What We Preach

If, after this, we are still adamant on fighting the good fight for what the new year means to us (which, of course, we all have the right to do & I fully support this!), can’t we just focus on our own side’s positives rather than harping on about what we believe to be the other side’s negatives?

Or better still, can’t we just accept that the entire population of Instagram doesn’t agree with us at every turn & live our social media dreams without needing any “them” & “us”?

These rhetorical questions from the middle of my real life venn diagram obviously need no answers but, as I’m a very happy size 24 fat lass who is actively seeking to lose weight to reclaim my health from conditions directly caused by my weight (hello there, obstructive sleep apnoea!), I support & identify with both circles.

When “new year, new me” discussions rear their ugly head, I can’t help but take offense when both of the communities I proudly belong to start throwing shade at me just for wearing the very shoes that I have to walk in every day.

Similarly, I can’t help but see the painful irony of fighting against being judged by judging another, which I will just leave there as my overall mic drop to drive that point home. Boom!

To Team Fatness & Team Fitness, please practice what you preach &, without wanting to sound like that annoying primary school teacher (probably the same one who taught you what venn diagrams are), accept others the way you wish others to accept you.

Published by The Unseasoned Wag

I'm Mrs Dani(elle) Walmsley, the Yorkshire-mouthed, fat-and-happy, thirtysomething of an unseasoned wife to a professional wrestler, learning more each day about how to wife like a pro & how to wag harder than my puggle, Betsy. View all posts by The Unseasoned Wag