I’m about to embark on a whole new exciting, terrifying, life changing chapter in my life that divides opinions of the body positivity scene & will potentially blacklist me from the curve community; I am in an NHS health & weight management program towards bariatric surgery.

On the surface it might seem an unfathomable contradiction for someone as openly body accepting & fat positive as I to make such a decision but please let it be known that it is purely personal with no reflection on anybody but myself for nothing other than health reasons.

As I mentioned in a previous post about having health issues – namely Obstructive Sleep Apnoea for which I rely on medical machinery just to breathe – that are directly caused or impacted by my obesity & easily reversible with weight loss. So it’s not through any fatphobic judgement of anyone else & it’s definitely not for any sort of “fat is wrong & slim is right” before & after, it’s just because I surprisingly quite enjoy this whole being alive lark!

I also discussed earlier this year how there’s a similar contradiction within Team BoPo in that, overall, it’s all very pro-individuality & pro-choice power until someone chooses to exercise said choice power for their individual self to lose weight. In those cases it then stops being “yey for being yourself & eff what others think of you” & becomes triggering behaviour & a fatphobic attack from the individual against every other fat person in the world. I intend this with a pinch of salt & a cheeky wink but you know there’s more than just a smidge of reality in that!

I’m Here For You. Are You Here For Me?

This gastric sleeve route is not a decision I’ve taken lightly & I hope those who doubt me or brand me as anything less than a strong-willed woman who is taking control of her life with no reflection on anything but her own wellbeing are accepting of this; I’ve made it known to all the counselors, dietitians & exercise instructors I’ve met within the program so far that I’m completely happy in my own skin as I am & I will never not be supportive of the plus size life… Yet I’ve been terrified of being shunned by the world that I’ll be forever supporting & have kept this to myself since February.

I bit the bullet to “come out” about it to a group of plus size friends online a few weeks ago. I went in head first with a heart-on-sleeve story that felt like a confession, fully expecting to be called all the hypocrites under the sun & blocked from the group.

At a time like this I could do without making enemies of anyone, especially not the tight knit community of fat ladies who have lovingly befriended me over the internet & welcomed me into their encouraging community of the utmost love & positivity. And it turns out I needn’t have been worried at all.

Stand Up & Be Counted

Not only were 99.9% of the reactions a comforting celebration of choice power but more than a few of these friends vocalised that they too are in the same predicament – some of my fat-and-proud friends are lifelong fat activists regardless of their own size but they still want to lose a few pounds for their own health reasons (some because their jobs are very physical, some for fertility reasons, some to lessen the symptoms of existing illnesses & conditions but all very personal to each individual) & are similarly worried that they will be shunned if they vocalise this to the plus population.

It really put me at ease to know that I’m not alone in this & that, in fact, I have some serious pillars of curvy support backing my personal choice.

It hurts my heart that a community that is such an open-minded backbone for a whole assortment of diversities & adversities can make a whole branch of our own network feel scared to be ourselves. But in “coming out” to my own fat friends I’ve had a large part of that fear taken away. I’m proud of myself for sharing & I’m so so grateful for the kind words offered to me.

I understand why weight loss discussion – especially to the extreme of surgery – can open up doors to fatphobia & be triggering of eating disorders & such like, but I really want to reiterate that you’ll be getting none of that from me. I will be documenting my health journey & will never be ashamed of reclaiming my health when it’s back within reach but, similarly, I will never believe that slim is better than fat nor will I share “Before & After” photos that imply that.

Being able to feel like myself is amazing but finding such support to do what I want for my health with no apologies or embarrassment is truly special.

I might be getting healthier & smaller but I’m still the same kind, supportive, funny, geeky, outspoken friend I’ve always been; I will never not be me. I’d love you all to stick around for my journey in the same way I’ve always had your collective back. 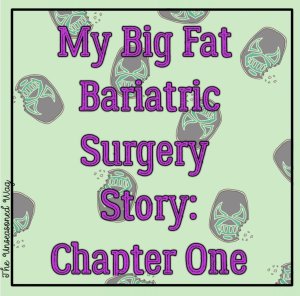 Published by The Unseasoned Wag

I'm Mrs Dani(elle) Walmsley, the Yorkshire-mouthed, fat-and-happy, thirtysomething of an unseasoned wife to a professional wrestler, learning more each day about how to wife like a pro & how to wag harder than my puggle, Betsy. View all posts by The Unseasoned Wag